Freeing off a stuck,seized engine.

Page by the owners of Baconsdozen Imperial Tools.

Stumbling across a long lost 'barn find' classic car,motorcycle or other machinery is many an enthusiasts dream but long stored cars can bring their own unique problems. Car engines stored in dry conditions and prepared for laying up with oil in the bores and being turned over every so often can survive well for many years,but at the other extreme,if stood for some time outside or in damp conditions,engines can quickly seize up with corroded pistons and /or rusted bores. Simply trying to force an engine that has stood for some time to move again can damage them,sometimes beyond economic repair,but many can be restored to running condition.

Don't make the mistake of using incorrect tools or making do with adjustable spanners etc on corroded fittings.For older vehicles you will almost certainly need imperial based,rather than metric tools. The 'proper' way is to transport a new project to a workshop and remove,strip down and rebuild the engine. It is worth spending a bit of time to see if the engine can be got running especially if it seems that the vehicle was running without major issues before being laid up. The first thing to do is look at the dip stick to see if the oil pan contains oil, if the stick has water droplets on it then water,has got into the sump. If the oil is gray and smells rancid it probably contains water and if it smells burnt the engine may have seized before the vehicle was laid up. It makes sense to drain the old oil if for no other reason to remove water and check in there are any bits of metal etc in the sump,if there are,its possible the engine was damaged before being laid up.A partly dismantled engine with no rocker cover,air cleaner,manifold or carburettor etc will possibly have had damp inside it which may have corroded the cylinder bores and pistons but even engines stored complete and under cover will corrode if damp and condensation can get to them. An engine that seized through overheating or lack of oil before being laid up can sometimes be freed off following the steps below but may already be damaged beyond repair.

Two things you can't have too much of in freeing a seized engine. 1) Patience and 2) penetrating oil.

Usually there is a nut or bolt on the crank end that can be used to try and turn the engine but the danger of breaking it off means a safer alternative is to use a lever on the ring gear through the starter motor aperture. The engine will need to be out of gear,resist the temptation to force things quickly by using a socket and a long breaker bar,if the bolt breaks off it will be an added complication to extract the remains. If the engine seems to have locked up remove the spark plug holes and squirt or pour some releasing fluid like Plus Gas or diesel fuel in the plug holes trying to get as much as possible on the cylinder walls. Leave the plugs out and try and move the engine. With some engine designs it is quite difficult to wet the bores but spoonfull of oil or fluid should be enough,it will have to be removed before the plugs are back in and serious attempts are made to start the engine.Hopefully it will get to the stage where it can be spun over on the starter with the plugs out which should eject the oil.Some people advocate the use of petrol and two stroke oil mixed or even petrol and ATF fluid.Thin oils like WD40 are really designed to chase off water,redex or thin penetrating oils can be used. Penetrating fluids will take a while to have any effect,dont expect an instant result..

If possible fill the radiator or the block if the engine is not in a vehicle with some hot water,this will expand the block slightly.Whilst waiting it might be an idea to remove the rocker covers and air filters etc if they are still in place to see if corrosion is present deep inside the engine.It's possible the engine might now have some movement on the crankshaft ,if so try and turn it back and forth gradually building up to a full revolution,if not try again with the release fluid and hot water but if it resists any attempts to turn after a few more goes more work will be needed. 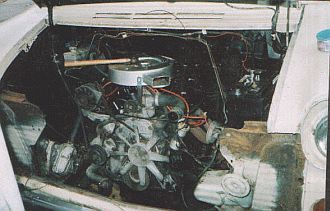 The oil should be drained and the sump removed although on a few engines this means further dismantling to gain access, it may be possible to start the pistons moving by removing the big end caps and tapping them upwards from below.It may prove difficult to pull them down again to refit to the crank and there is no way of knowing how bad the bores and pistons are corroded and for these reasons its better to remove the head.

It might be difficult to remove rusty head nuts and studs,and the cylinder head might be stuck to the block but removal will show the state of the pistons and exposed portions of the cylinder bores and allow easy access to the piston tops.Aluminium alloy in contact with steel will corrode badly if it gets wet and can stick the pistons to the bores. Gently tapping the pistons with a hammer and wooden block it might be possible to hear or see if they are free,with pistons that aren't flat topped it may be possible to tap them sideways to break the corrosion seal.Sometimes a feeler gauge or similar will help clear corrosion between piston and bore and give releasing fluid a chance of getting down the sides of the piston and around the rings.By removing the big end caps it should be possible to work out which pistons are stuck.Removing the big end caps on the seized cylinder it may be possible to move the crank journals away so that the seized pistons con rods are clear of the crank and they can then tapped down the bore.The best tool to use is a solid piece of wood slightly smaller than the piston and lots of patience. Hitting too hard will damage the piston, lots of release oil,heat and gentle tapping should free the piston but if it will only move with very heavy blows the piston and maybe bore are probably too damaged to be usable anyway.

When finally the pistons are free the big ends should be reassembled and the bores lightly rubbed with very fine wet and dry paper to remove any loose rust. If the bores are pitted or damaged then a rebore and new pistons and rings etc have to be considered.If the bores are OK they should be left well oiled and the engine reassembled with new gaskets and filled with oil. Some engines will need their oil pumps primed after standing for a long time,sometimes this can be done by removing a plug and filling the oil ways with oil or the pump is removed and packed with petroleum jelly.The oil filter should be replaced and a new one fitted.(some  filters can be filled with oil before fitting which lessens the time the engine will be turned before oil starts to circulate). The engine should be spun with its plugs out until the oil light or gauge shows oil pressure and to clear excess fluid from the bores.If the carburettor is badly corroded or beyond repair it may be possible to get the engine to fire and run for a few seconds by spraying fuel into the intake manifold,use caution as a backfire could sart a fire and block off the fuel supply to the damaged carb to avoid spraying fuel onto the engine.If the carburettor seems OK check that the throttle works and is not stuck open and the off position on the ignition works,so that there is no chance of the engine running away with itself. Then after normal checks and cleaning out the carb(s) and fuel lines and probably rigging up a temporary fuel supply with a can rather than relying on the tank which may be corroded and need draining of old stale fuel ,the engine can be started. Let it warm up slowly,the exhaust will smoke because of the excess oil but hopefully the engine will run.If the cooling system no longer holds water don't run the engine for more than a few seconds,if the engine will not hold water and there are no obvious external leaks it may have a damaged head gasket or internal corrosion has broken through a water way. Check for water in the bores or sump,either way internal water leaks can seriously damage a running engine.

Once the engine is running then decisions as to wether it warrants a full rebuild or recon are easier to make.There is no doubt that a running engine is good for boosting enthusiasm in any restoration or repair project.

You might find the clutch has stuck to the flywheel,holding or wedging the clutch pedal down and rocking the car backwards and forwards in gear or jacking it up and rocking one of the wheels might free it off.Towing the vehicle slowly with it in gear and with the clutch pedal down might free it but the sometimes recommended method of running the car in gear on jacks that are suddenly lowered is dangerous and can cause real damage.It might be possible to tap the clutch or carefully use a lever through a hole in the bell housing or leave the vehicle overnight with the pedal held down.If all else fails the engine or gearbox will have to be removed and the clutch dismantled. 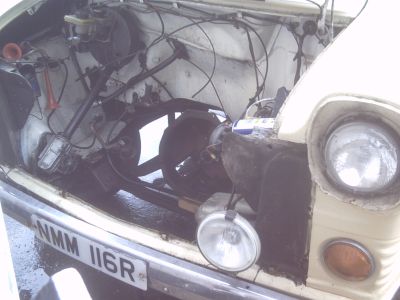 Stuck brakes have to be gently freed off,if the vehicle has been left for some years with the handbrake on removing the rear drums can be a hassle,remember most brake drums are cast iron and should not be hit hard with a hammer which can cause them to crack. Removing the handbrake cable can help,some cylinders slide and carefully tapping them may help free off the brakes..Going round the outside of the drum (wheel nuts removed) with a copper faced mallet or using a hammer with a hard wood block between it and the drum will sometimes free things off enough to remove a brake drum...Corroded and stuck calipers and cylinders will possibly need replacing or repair.Patience and care will avoid breaking something that might be impossible to replace,if its getting a bit 'hectic' stop for a cuppa and then have another go.

Links to other pages on this site